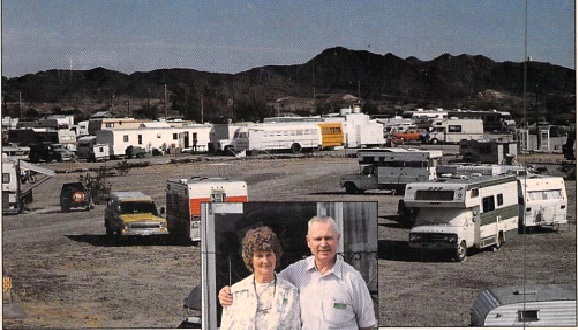 Original article by Eleanor Engelstad (May 1986)

In the spring of 1968, Jim Fish and his wife Katie, were traveling along old U.S. 80 just west of Winterhaven, California, when they came upon a group of retired people camping near the highway in RVs. In today’s parlance these people were snowbirds boondocking in the desert.

The term “snowbirds” originally referred to migratory workers who moved south in the winter, but today it generally means a retired person who escapes to the south from the snow and ice of northern winters. Camping out in an isolated area where there are few facilities is known as “boondocking.”

During their conversation with the campers, the Fishes discovered that local activities were virtually nonexistent. The ultimate in recreation was a drive across the Colorado River to Yuma, Arizona, to buy groceries. Jim, a volunteer chaplain in the Air Force, caught a glimpse of his future while talking with the boondockers. he saw a need for someone to help organize these people and he and Katie decided that after retirement from the Air Force in 1970, they would start a church and community center in the desert.

The Fishes stuck by their dream and returned to the lower Colorado River area in January of 1972 and camped near Imperial Dam. Although no one would speak to them initially, Jim, whose crinkly smile and friendly countenance belie an iron-willed persistence, wouldn’t give up. He and Katie returned for the 1973 winter season and held church services under a tree. All activities were financed from Jim’s military pension and a year later, in 1974, the Christian Service Center was born. With a down payment of $100 donated by friends, the Fishes purchased the main building — a 16-by-45 foot trailer. Within six days an anonymous donor paid the balance and the nucleus of what is now a small trailer city was established on ranch land rented from a family trust in Phoenix. Since that modest beginning, additional buildings, vehicles and equipment have been acquired through both donations and bequests.

During 11 years of operation the Fishes, along with 60 volunteers, have built an impressive complex of trailer buildings, where at various times during the winter season, an estimated 15,000 people camp on Bureau of Land Management land in this rocky, scrubby desert. The Christian Service Center not only provides these visitors with non-denominational church services but also offers numerous free services such as mail delivery, message service, arts and crafts, repairs and just plain fun.

Typically a snowbird couple arrives at the Imperial Dam area and locates a suitable camping spot on Coyote Ridge. Because they’re expecting friends to join them, they may go to the center to sign up with the locator service so their friends can find them. At the Locator and Message Center a helpful volunteer hands the couple a locator map form and a mail authorization to complete. This enables friends to easily identify their campsite and allows staff personnel to collect their mail for them at the post office in Bard, California. Telephone messages will also be taken for them and in the event of a real emergency such as death, serious illness or other catastrophe back home, a center volunteer will bring the message to where they have camped.

The center also keeps a message file in which telephone messages or notes from friends are placed. Anyone may check this file whenever the center is open, as well as using the center’s lost-and-found service or posting a notice on the swap board.

Once in a while snafus occur. Katie Fish laughs, for example, about the letters they receive that are addressed to Grandma and Grandpa. Center personnel post these letters outside the mailroom hoping that someone will recognize the handwriting or perhaps the return address.

Since many of the snowbirds are older–between 65 and 75, medical problems are not unusual. Campers can have their blood pressure checked at the center on Monday mornings. Less mundane activities help keep the retirees busy– oil painting class on Thursday afternoons in the arts and crafts trailer, woodworking, sewing, quilting or other hobbies and crafts. Bowling is available four mornings each week at the Army’s Yuma Proving Ground and the center itself has excellent horseshoe courts for recreational and tournament use.

Other recreational activities include hymn sings on Tuesday evenings, game night on Monday, movies on Friday, the Pounds-Off club on Thursday and the campfire cookout, held on the same night. One very big event at the center is the monthly swap meet, often attended by over 2,000 people; admission is free. Swap meet Saturday, center volunteers set up the refreshment stand, provide free coffee and sell hot dogs and other snacks at cost.

The center also offers valuable camping services. Visitors can have batteries charged in the battery trailer, small appliances repaired in the electronic shop, welding done by an expert welder or other repairs done in the fixit shop. All services are performed by skilled volunteers at no charge. However, donations are accepted and usually support 80 percent of the center’s expenses. The other 20 percent comes from outside sources.

To Jim Fish, however, the church and its outreach to the desert’s transient community are the most important services. On Sunday the main building becomes a church. Since it only accommodates 100 people, the overflow is seated in two buses parked nearby that are equipped with closed circuit TV. Another TV sits outside under an awning. At the peak of the season 500 people representing up to 28 different denominations may attend services.

What does Fish envision as the future of the center? A building fund has been established, and his dream is to build a 750-seat auditorium with room for activities in an adjacent area. Although the purchase of land may be financed, improvements will be done on a pay-as-you-go basis. Fish is adamant about not begging for money and not being in debt. He says his philosophy is “we don’t spend anything in advance. We spend it after we have it.”

Given his drive and unwavering faith, the buildings will be built, the center will continue to grow, and more snowbirds will come to enjoy this spiritual oasis in the desert.

Toggle the Widgetbar
Skip to toolbar